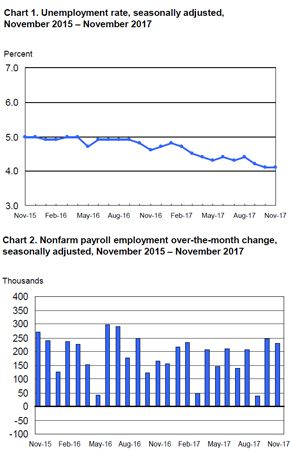 The unemployment rate remained at 4.1 percent in November, with 6.6 million people unemployed. Over the year, the jobless rate has decreased by 0.5 percentage point.

“These are really strong numbers, which is pretty exciting, since this is our first clean read after the volatility associated with the hurricanes,” said Josh Wright, chief economist at software firm iCIMS, in an interview with The Washington Post.

Professional and business services added 46,000 jobs in November. Over the year, the industry has gained 548,000 new positions.

Healthcare employment grew by 30,000 in November, with 25,000 of the new positions in ambulatory healthcare services. Healthcare has added an average of 24,000 jobs per month in 2017.

Construction saw an increase among specialty trade contractors, adding 23,000 over the month.

Employment in retail trade, transportation and warehousing, financial activities, and leisure and hospitality was little changed in November.

Wages did not increase as much as economists expected in November, with average hourly earnings for all private nonfarm employees increasing $0.05 in November to reach $26.55.

However, most economists believe that wage growth will accelerate as the unemployment rate continues to drop, The New York Times explained.

The strong November jobs report makes it likely that the Federal Reserve will vote to raise interest rates next week.

“Not that it was a hurdle to raising rates next week, but the Fed will feel very comfortable with this kind of a jobs report,” said Ward McCarthy, chief financial economist at Jefferies LLC, in an interview with Bloomberg.

The vote to raise rates would close out a strong year for the U.S. economy.