Ghosting: One thing you should never do after accepting a job offer or interview invitation 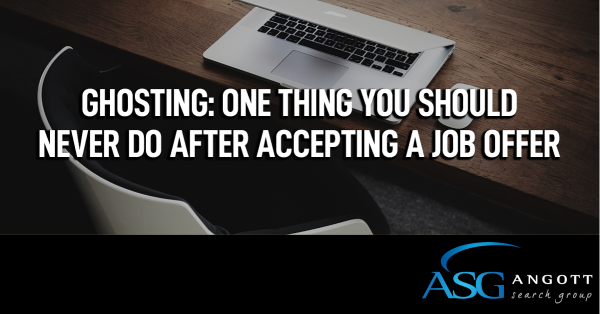 Ghosting is a surprising new trend that has become much more prevalent during the recruitment process in recent years. More and more candidates are going through the interview process with an employer, giving every indication they’re interested in the company and then they’ve vanished without a trace. In fact, the 2019 MRINetwork Recruitment Trends Study revealed about 31% of employers track fall-off rates of new-hires (individuals that accept an offer but don’t show up for the first day of work), illustrating how problematic ghosting has become.

Regardless of whether you’re actively or passively looking for a new opportunity, it’s important not to become a part of this trend. Not only will ghosting an employer destroy any relationship you have with your interviewers, as well as the company’s HR department and anyone else at the organization forever, it’ll also potentially hurt your chances at other organizations if word gets out. As a result, you could find yourself at a severe disadvantage at other companies where you’d like to apply.

However, not all industries are affected equally. “Ghosting is typically seen in lower-wage, high-volume hourly roles such as retail and hospitality, but the trend has become more widespread in the last year due to the consistently tight labor market, particularly in technology and healthcare jobs,” according to the article.

The following are tips for avoiding ghosting during the recruitment process, as well as what you should do instead:

1. Take genuine interest in learning more about the job early in the process. Interviewing can be tough, but you want to ensure you are having honest conversations with potential employers. This will enable you to assess cultural as well as job fit, identifying any concerns faster. Ghosting will become less likely because you will have gained all the necessary info earlier in the process, making it easier to walk away cordially from an unideal opportunity. Ultimately you should feel less pressure to let the employer down or face the awkwardness of explaining why you’re not interested in a job.

2. When you’re offered a new role, keep the lines of communications open. If you’ve received a better, competing offer and might consider ghosting, don’t do it. Instead, thank the HR representative you’ve been working with for their help, explain the situation, send notes to the managers and others you’ve interviewed, and simply decline the position (if that’s what you truly want to do).

If you are simply weighing two great offers against each other, you’re not alone. Many good candidates have more than one offer. In these situations, it’s key to be upfront and let your future employer know, in a non-boastful or money-driven way. This is likely to go over better, if you have been honest throughout the process about interviewing with other companies. You don’t want the disclosure of this info to come off as a power play. Immediately thank all involved parties for extending an offer and let them know you will provide an official answer with 48 hours, after reviewing the offer in detail. Weigh each offer fairly and choose what is in your own best interest. Then take the time to thank everyone who has interviewed you. Be honest about your choice and why you made it. You want to leave everyone with a positive impression, not as “that person we never heard from again”.

Remember that just because you may not be interested in this offer or role today, next year might be different. You don’t want to burn bridges that will negatively affect you being considered for other opportunities in the future. Communication and a graceful exit can ensure you’re considered for future opportunities that might be of interest.

By being aware of how problematic ghosting is, as well as the issues that it brings up, you can save yourself future embarrassment and remain professional and respected in your industry for years to come.