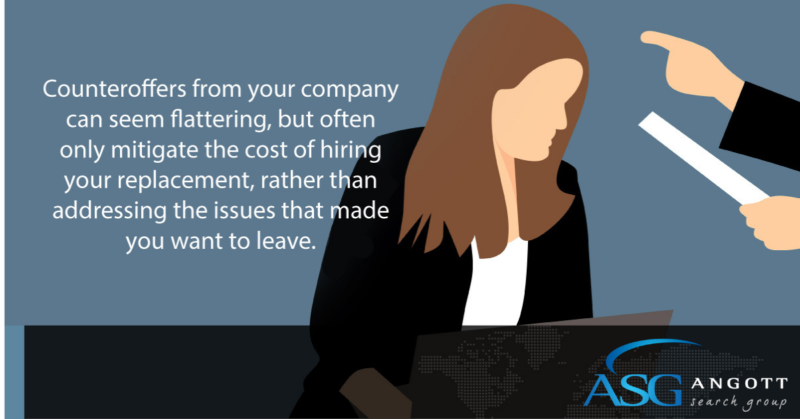 You’ve just accepted a great new job offer. The only problem is now your current employer is offering an enticing counteroffer to make you stay. As many industries struggle to find the qualified candidates they seek, businesses are increasingly fighting to retain key staff members by making counteroffers. However, just because they’re willing to do so doesn’t mean it’s in your best interest, a truth that employees should consider if faced with this situation.

Approximately 4 in 5 employers say they’re likely to make counteroffers to valuable employees in an effort to encourage them to stay put, according to findings from the 2018 Performance Management Study. However, close to 30 percent of employers in the poll said there’s a stigma placed on people who stay as a result of a counteroffer.

Candidates, it seems, largely expect their current employers to make these retention attempts, with nearly two-thirds considering it more probable than not, the study found.

Employers who make these offers often do so begrudgingly. What’s more, in instances where workers decide to accept these counteroffers, they rarely solve the issue that led to their wanting to go elsewhere.

Here are a few reasons why counteroffers do more harm than good:

Employers’ hands may be tied

There’s no denying that it feels really good to be wanted, particularly in business settings. Counteroffers show, at least on the surface, that your current employer doesn’t want you to go. While this may be true, it’s important to keep in mind that there may be more to these offers than meets the eye. For example, hiring new workers drains company resources. According to a recent CareerBuilder poll, the loss of a good hire averages $30,000 per worker. In short, dollars and cents makes retaining current employees – even average ones – a safer bet than going with an unknown quantity.

Bridges may be burned

Much like a Band-Aid on a severe cut that requires stitches, counteroffers mask the underlying reasons that workers want to leave in the first place. As noted by Society for Human Resource Management CEO Johnny Taylor, there are usually many reasons for why people want to seek what they perceive as greener pastures, and rarely are they resolved by higher pay alone.

“While your company may decide to counteroffer because it wants to keep you, your employer likely will label you as someone who is ready to jump ship,” Taylor explained, writing for USA Today. “Having that reputation won’t bode well for you and your future at the company.”

Ultimately there’s nothing wrong with wanting to pursue other opportunities. Should your current employer make a counteroffer to get you to stay, it’s important to evaluate them with your eyes wide open, recognizing their attempts may be long on promises but short on substance.