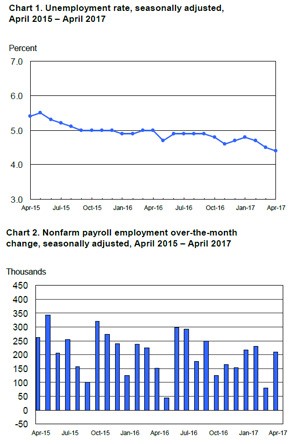 The U.S. job market bounced back in April, adding 211,000 nonfarm payroll jobs during the month, according to data released today by the U.S. Bureau of Labor Statistics.

The gains exceeded Bloomberg economists’ prediction of 190,000 jobs added, and followed a weaker-than-expected March that saw 79,000 jobs added, revised down from the previously reported 98,000 jobs.

Average hourly earnings for all private nonfarm payroll employees increased by 7 cents in April to reach $26.19. Last week, a government report was released that showed private sector wages had their biggest growth in a decade in the first quarter of 2017, according to Reuters.

With the strengthening employment figures, the Federal Reserve is likely to raise interest rates later this year.

“Labor market conditions remain robust and continue to tighten,” said Chief Financial Economist Ward McCarthy of Jefferies LLC in New York, according to Bloomberg. “This data will keep the Fed on track for a preferred 2017 normalization timeline of rate hikes in June and September and the first step toward balance-sheet normalization in December.”