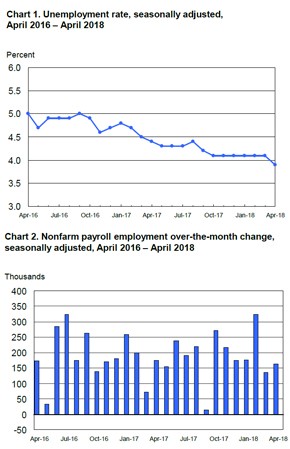 Nonfarm payrolls in the U.S. added 164,000 jobs in April 2018, according to the latest release of the Employment Situation Summary from the Bureau of Labor Statistics. While below expectations of just over 192,000 new jobs, this expansion of the labor force exceeded the previous month’s figures, even when accounting for upward revisions bringing the March total to 135,000 new positions as opposed to the original 103,000.

Additionally, the unemployment rate slid to 3.9 percent during April. Reuters reported that this new percentage represents the lowest unemployment figure seen since December 2000.

When unemployment fell to 4.1 percent more than six months ago, that contraction itself represented a near-record low and provided strong evidence of how robust the American job market has been in the last few years. The metric’s stability at this level for nearly half a year was arguably even more remarkable. As such, April’s added drop in the joblessness rate could back up some economists’ predictions that the second quarter of 2018 will feature better performance across multiple economic metrics than what was seen in the year’s first quarter.

Professional and business services led the pack in terms of job growth-producing industries, with 54,000 jobs added in April. No other sector even came close to this level of employment gains.

In the runner-up spot, manufacturing saw the creation of 24,000 roles, stemming in no small part from the continued strength of the durable goods production market. Healthcare, which has been the American economy’s brightest star almost without interruption for the past two years, also added 24,000 jobs. The mining industry rounded out April 2018’s contingent of fields with noteworthy job growth, with the creation of 8,000 positions. No other fields experienced any statistically significant addition or subtraction to their ranks of employed workers.

Feelings among economic analysts and business leaders regarding the overall American economic situation appear generally positive, if tempered by a number of tangential figures and factors. In a note released ahead of the report, Wells Fargo Securities senior economist Sam Bullard expressed this sort of guarded optimism.

“We believe the U.S. labor market remains on solid footing,” Bullard stated, according to the news provider. “That said, as labor market conditions continue to tighten and the pool of skilled workers on the sidelines continues to shrink, future monthly hiring gains are likely to slow from the current hiring pace.”

Numbers responsible for uncertainties regarding the labor market include the labor force participation rate, in which the BLS identified a slight decline, falling to 62.8 percent. Some economists consider this metric a better barometer of American employment due to its measurement of people who are actively working and its ability to account for individuals who’ve ceased seeking work in any measurable manner.

Lower than expected wage growth of 0.1 percent may also have contributed to any sense of unease experienced by company leaders, economic experts and workers.

On the other hand, Bloomberg reported that any further drop in the U.S. unemployment rate may prompt the Federal Reserve to view the figure as unsustainable in the long run, thus necessitating further hikes to federal benchmark interest rates – perhaps beyond the increases already expected to occur in 2018. The first of these is tentatively scheduled to take effect sometime in June. Also, expected surges in consumer spending and the possibility of tax cuts provide further hope of continuing overall positive performance across the American economy.