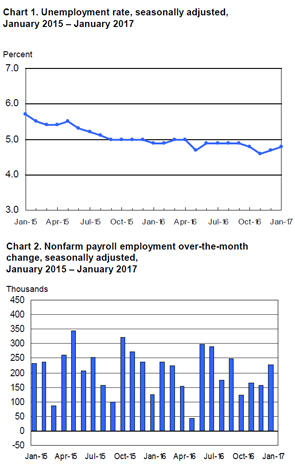 Starting the first month of the year off strong and marking the last set of employment data representing the previous administration, the U.S. labor market added 70,000 more jobs in January than in December 2016, according to the Employment Situation Summary released by the Bureau of Labor Statistics.

Though a steady increase in job growth was forecasted for last month, estimates were well under the 227,000 jobs actually added in January. Analysts surveyed by Bloomberg forecasted just 180,000 jobs to be created, according to the source.

The New York Times however did report that several analysts on Wall Street were expecting closer to 200,000 jobs based on data released Wednesday from ADP, a human resources company that processes payrolls.

Despite continued job growth, the likelihood of a Fed interest rate hike has dropped from an 18 percent chance to a 9 percent chance, according to the CME. In a statement to CNBC, Curt Long, chief economist for the National Association of Federally Insured Credit Unions said, “The lack of wage growth suggests further room for tightening in the labor market.” “So long as that remains true, and with inflation still below target, the Fed will be content to hold off on further interest rate hikes.”

Unemployment and lack of wage growth

After picking up toward the end of 2016, wage growth seems to have slowed again. Though minimum-wages have increased in some states, across the job market there was only a 0.1 percent rise in average hourly earnings.

“We haven’t really seen that significant acceleration in wage growth that we would anticipate given how close we are to full employment,” said Ryan Sweet, an economist at Moody’s Analytics in West Chester, Pennsylvania, prior to the release of the report Friday morning. “I think that’s coming, it’s just going to take a little bit more time.”