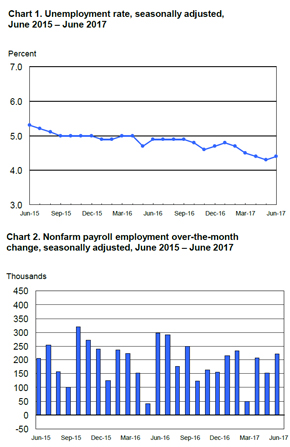 The June Employment Situation released by the Bureau of Labor Statistics showed that the U.S. economy added 222,000 jobs. This far exceeded analysts’ expectations of just over 170,000 jobs. The current unemployment rate is 4.4 percent.

Healthcare added 37,000 jobs, with 25,000 of these roles increasing in ambulatory healthcare services, and 12,000 in hospitals. Despite continued job growth, the Bureau of Labor Statistics noted that the average number of monthly jobs added in healthcare in 2017 is 24,000 vs. an average of 32,000 jobs per month in 2016.

Industries such as construction, manufacturing, wholesale and retail trade, information and government were relatively unchanged throughout the month.

The New York Times reported that June continued building on the growth of previous months. The average number of jobs added to the economy from April to June was 194,000. For 2017, the average monthly job growth is at 180,000, a slight decline from the average 2016 monthly growth of 187,000 jobs.

The source also noted that analysts anticipate the unemployment rate will continue to stay down, even when taking a closer look at the number of discouraged workers and “underemployed” workers, or those who are working part-time but would prefer full-time roles. In June, the unemployment rate that accounted for these workers was at 8.6 percent, a slight uptick from the previous month. Yet, this number is also a full point lower than it was at this time last year.

In the midst of this good news, analysts continue to watch the slow wage growth.

“The wage numbers are certainly weaker than expected, so it keeps alive that whole debate about the relationship between slack and inflation and how far the Federal Reserve should allow the unemployment rate to fall,” Jim O’Sullivan, the chief U.S. economist for High Frequency Economics, told the Times.

Despite these concerns, the hourly wage increased by 2.5 percent from the same time one year ago. The current hourly wage is $26.25 for private non-farm payroll.