How to Enhance Communication in the Interview 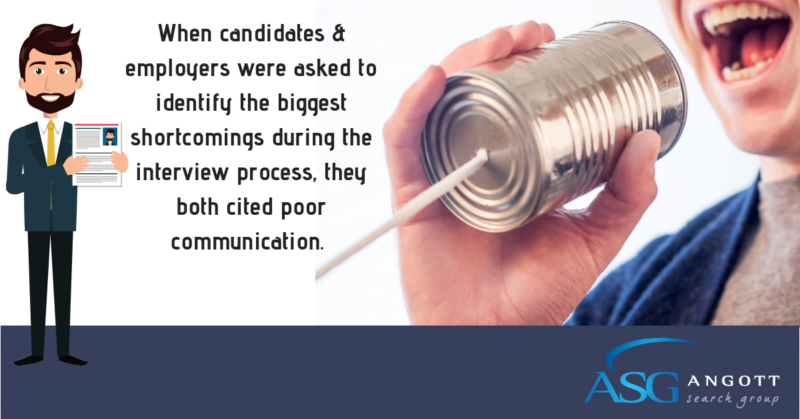 Interestingly, when candidates were asked a similar question – What are the greatest gaps or shortcomings of companies where you’ve interviewed most recently? – they too cited bad communication, particularly after final interviews, as the biggest problem of all, referenced by 36 percent of the individuals polled.

Candidates: The resume may provide a general idea of what you bring to the table, but it’s really just an overview. When asked to elaborate on certain aspects of your resume, be prepared to expand on what you listed without embellishing. Twenty-eight percent of employers in the survey cited lying about credentials as an issue when interviewing candidates. In a separate poll conducted by CareerBuilder, 75 percent of human resource professionals said they’d caught job seekers in lies before.

Employers: Candidates come to the interview wanting to better understand the company beyond what they’ve independently researched. They’re less than pleased when the question-and-answer session ends with as much information as when they came in. Ensure that the role they’re seeking matches what was in the job description. Nineteen percent of candidates in the MRINetwork survey pointed to discrepancies in the scope and duties of the given role as a big interview turnoff.

Candidates: Sending a thank you note is not only courteous, but it shows that you’re highly interested in the job for which you’ve interviewed. Enthusiasm is a crucial component of landing a position. Thirty-seven percent of employers in the  poll referenced lack of enthusiasm about the job as one of the top shortcomings among job seekers they’d evaluated.