How to Navigate New Laws and Attitudes on the Wage Gap 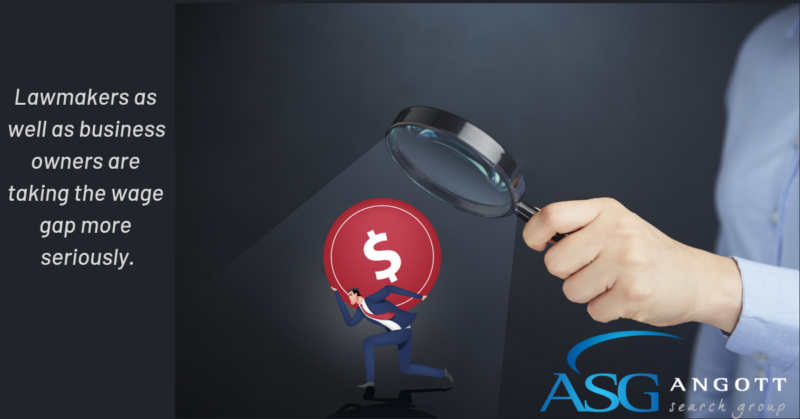 Women have made substantial strides over the years in the workforce. Since 1972, for example, women-led businesses have surged by almost 3,000 percent, according to a study conducted by American Express. In 2017, women and minorities represented a majority of the individuals selected to fill vacated board seats among S&P 500 companies, Bloomberg reported. Despite these inroads, inequalities between men and women remain. The wage gap is just one of those areas.

It’s said that women earn approximately 80 cents for every dollar that a man makes for equal work. However, a study from the Institute for Women’s Policy Research suggests that the disparity may be even greater, with women making just 49 cents compared to the average man’s dollar. Other studies, such as one from PragerU, suggest the data is being misinterpreted, and the wage gap is more like 4.8 – 7 percent, when you factor in the individual choices people make throughout their career that impact pay.

In light of these inconsistencies, lawmakers as well as business owners are taking the wage gap more seriously. For example, under the Equal Pay Act, employers are mandated to compensate women and men the same amount “for performing substantially equal work.”

To avoid unconscious biases, seven states, Puerto Rico, three cities, and three counties have enacted “Can’t Ask Salary Laws” which prohibit private sector employers from asking candidates about how much they are currently earning or have earned in previous positions. Additionally, several states, cities, and counties have enacted such laws which are applicable to public sector employers. While this represents a minority of states, steering clear of wage-related inquiries makes good business sense and puts more of a focus on workers’ qualifications as to what determines their salary. Still, not wading into these discussions is often easier said than done, both for businesses as well as candidates.

Here are a few strategies to better adhere to existing wage laws:

Just because salary history has become a sensitive topic, it doesn’t mean that candidates are no longer interested in it. It remains among the top factors they consider when deciding on a potential employer. In light of this, consider mentioning the compensation range when advertising job openings. California law requires employers to provide a candidate with “the pay scale for a position” for which they are applying, if requested by the candidate. Alternatively, you may prefer to ask applicants about their salary expectations in initial screening calls. This not only enhances transparency, which candidates want, but also helps weed out people who have salary expectations that exceed the company’s budget, saving time and money.

It’s pretty straightforward: The better workers perform – whether in quality measurements or productivity – the more they stand to earn.

This free market system incentives current and potential hires to give it their all on the job so they can better provide for themselves and their families. In job interviews, employers may want to briefly touch on merit pay to demonstrate that the company is truly invested in equal pay for equal work.

Employers may be mentioning salary earlier in the hiring process, rather than during the interview itself. As a candidate, you can prepare for this possibility and how you’ll respond by looking into what the average worker in your position earns. You can get a ballpark estimate online, such as the Bureau of Labor Statistics’ Industries at a Glance website. Doing your due diligence can be used as a negotiating tool if compensation offered is lower than the average for the equivalent position.

Don’t ask about salary at the outset

Employers are increasingly holding several rounds of interviews to find the best person for the job. This kind of thoroughness can push back discussions about pay until later in the process, so it’s important not to come across as greedy or money-hungry, by bringing up salary too soon. For example, instead of mentioning salary in the first interview, opt instead to bring it up in the second or third round. The context of the conversation can help you determine the right time.

More comprehensive wage laws are an attempt to level the playing field. By being aware of them, employers and candidates can improve fairness and better appreciate the value of hard work.