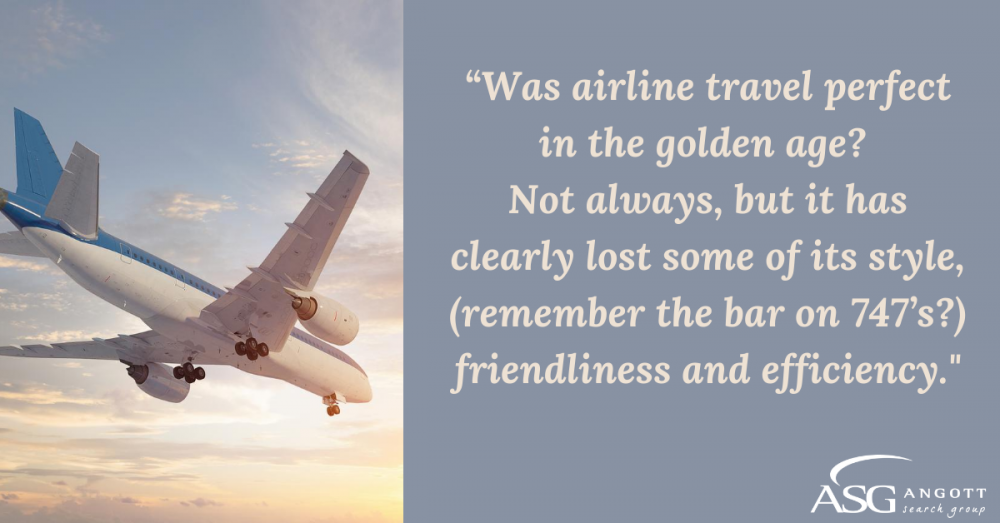 Vice President, Sales via telephone: “Hey Joe…Corporate has announced a last-minute training session to review our upcoming product launch.  We’ll need you to catch the next plane to Chicago.” This scenario was quite common during what I often refer to as the “golden age” of airline travel.  However, in the twenty-first century, unless a video conference serves as an alternative, traveling by air has changed considerably. Clearly, there are some aspects of airline travel which have improved. Electronic reservations and ticketing are examples. The pricing options resulting from deregulation in the late 1970’s are also a welcome improvement, although often accompanied by a decrease in services.

Just for fun, allow me to describe what airline travel was like when my attendance was requested at the corporate office a few decades ago.

Upon arrival at the airport, I would park my car in a convenient, reasonably priced lot. A short walk to the terminal followed where I was greeted at the ticket counter by a friendly, efficient reservation clerk. My ticket to the windy city was purchased (on the spot) smoothly and promptly…and with a smile. “Your plane departs in thirty minutes. Just walk through Concourse A to gate 37. Have a nice flight Mr. Giacomin and thank you for choosing Eastern Airlines.” With my ticket (in a decorative folder)  tucked inside the vest pocket of my suit , briefcase and carry-on luggage in hand, I proceeded toward the gate, stopping at a sundry counter to purchase a newspaper and make a quick phone call. (There were no cell phones – another terrific advantage these days.) Note: No security checks, shoe removal or dumping everything in my possession into a gray box occurred.  There was also an abundance of courtesy and professionalism displayed by every level of airport/airline personnel.

Prior to my flight, I sat briefly in the gate area anticipating the boarding announcement. I casually observed the passengers I would be flying with: professional men and women, students traveling back to college, members of the armed forces and families traveling for pleasure. Most, regardless of their mission, presented themselves with style and good taste, (not necessarily high fashion or expensive) which is often not the case anymore. Boarding the aircraft began with a pleasant greeting from the flight attendant and quite often, the Captain. The on-board lunch was tasty and nicely presented. The aircraft was clean, the flight was smooth and arrival at Chicago O’Hare, on-time.

Was airline travel perfect in the golden age? Not always, but it has clearly lost some of its style, (remember the bar on 747’s?) friendliness and efficiency. Fewer domestic airlines may be one reason. Gone, via merger or otherwise are Braniff, Northwest, Trans-World, Pan American and Eastern Airlines, to name just a few?  The rivalry was of significant benefit to the consumer. Who knows, maybe some foreign competition would shake things up. As with the auto industry, the influx of imported vehicles ushered in a major improvement in the quality of American products.  FAA regulation prohibits it, but imagine what it would be like to fly New York to Los Angeles via Singapore Airlines? Chicago to Miami on British Airways? Personally, I believe the carrier with the most leg room, wins!